By Alison B. Stevens, EdVestors Senior Director of School-Based Investments

As part of a collaborative event on July 10th, EdVestors and the Rennie Center for Education Policy & Research presented new research on the 2017 School on the Move Prize winner, the Mildred Avenue K-8 School. The case study details Mildred Ave’s dramatic turnaround, exploring the role of teacher leadership and labor-management collaboration in driving rapid school improvement as a best practice example for others.

The event included a panel featuring key perspectives on the school’s transformation – current Waltham Public Schools Superintendent Drew Echelson who played a central role in the Mildred’s turnaround during his tenure as a Network Superintendent in  Boston; Danielle Neville, a founding Mildred Ave teacher who served on the school’s intervention team; and Jessica Tang, Boston Teachers Union President. The event concluded with a keynote from Massachusetts Commissioner of Elementary & Secondary Education, Jeffrey C. Riley.

In 2013, Mildred Ave was a school in crisis. Academic performance, as measured by the MCAS, was among the lowest in the Commonwealth. Average principal tenure was just 18 months, and shifting priorities contributed to poor school climate among students and staff.

Five years later, Mildred Ave was designated a Level 1 school, the highest category in the  Massachusetts Department of Elementary and Secondary Education accountability system . The school has seen dramatic improvement in both school culture and academic achievement with learning characterized by a focus on academic rigor.

The school’s transformation began with a unique collaboration between the Boston Public Schools (BPS) and the Boston Teachers Union (BTU) – applying a rarely-used clause in the BTU contract that allows teachers to form an intervention team to develop a plan to turn the school around.

With the support of the BPS central office and the BTU, Mildred Ave teachers drove schoolwide and classroom-based decision-making, a key piece of the school’s successful transformation.

“This is about empowering teachers: believing in them.”

Teachers at Mildred Ave knew that the school was not delivering on its promise of a quality education for all students, but had had little voice in school and instructional decisions in the past.

From the start of the process, teachers were at the center of the school’s turnaround efforts. Equipped with data and best practices gleaned from other successful school turnarounds, teachers on the newly created intervention team – made up of educators appointed by BPS and the BTU – identified what needed to change to better serve Mildred Ave’s students and began to deliver on those changes.

“As teachers, we were in classrooms and saw the potential of our students every day.”

Ensuring that students were at the center of all school turnaround decisions was key to setting priorities for the turnaround.

The intervention team first set its sights on instructional rigor in the classroom. In addition to identifying and retaining teachers with both the instructional skill and commitment to the work ahead, the intervention team sought 60 hours of professional development per year for all teachers, more than double the number of BPS contractual hours. The BPS central office supported the request for expanded professional development time, and extended the school day by 30 minutes, trusting the teachers’ plan.

“We built trust around the strategy before implementation.”

As more teachers got involved in planning for the school’s future, they became more invested in the outcome.

“We need to get back to basics: quality instruction.”

Throughout Mildred Ave’s transformation, the teachers, district and union leadership, and the school principal knew that at the core, classroom instruction was instrumental in turning the school around. By trusting the expertise of teachers,setting an expectation of continuous improvement, and providing supports and professional development opportunities for teachers to be successful, the Mildred Avenue K-8 School has become an example of what’s possible when collaboration is at the center of school improvement efforts.

Alison Stevens is the Senior Director of School-Based Investments at EdVestors. 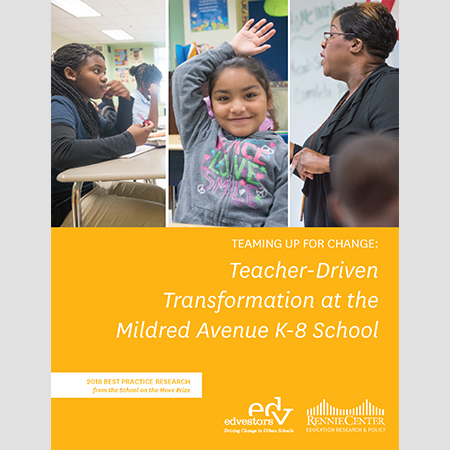